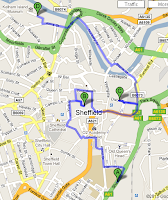 As I said last November, I arranged to revisit Dudley with my family. So this time, the emphasis of this post is family friendly public houses.

We travelled down to Wolverhampton train station on 29 July 2010 (from Stockport platform 2 to Bournemouth). When we arrived in Wolverhampton, we discovered that the bus station had been pulled down to build flats; that’s progress? Buses we wanted were only around the corner, 126 or 558, to Dudley town centre. The single ticket price was £4.35 for two adults and one child. Be warned that Midland Travel do not give change.

The 126 bus stops near The Court House on New Street (opposite the police station). I found this public house appealing the last time I was there. Last November, this public house was not cheap by any means, whether for good or drink. Anyway, this time I refused entry; I was with a child. Typically, no apology was offered and I did not ask. I have given up on anti-children attitudes in English public houses (not experienced elsewhere). So, we walked back out. A customer at the door suggested the nearby Malt Shovels (Banks’s public house).

The Malt Shovels had a great drink of Ringwood’s Old Thumper for £1.50, slightly over 5.6%. All meals were advertised to be less than £3. It is pretty inexpensive by any standard. It is better value for money than anywhere I know in Stockport. We all sampled the food; just about everything with chips. It stopped me from turning into a skeleton for a few hours at least.

I wanted go to the Zoo or the Art Museum but the family want to get back to the hotel. The taxi was £6.90 from the bus station, which is same as it was last time. We had a look around Aldi before checking into the hotel (Travelodge, Room 32).

The next day, we took the 246 bus into Dudley centre, which was £4.25. We visited the Art Museum first. The dinosaur exhibition is now permanent. The Saxon galleries were quite impressive too. I took a few photographs of exhibitions when I was there last. So, I did not take any more photographs this time.

The Priory (Banks’s public house) on New Street had increased the price of its steak pie and pint by 10p since November to £3.60. It is still more than a bargain.

After eating, we went to visit the zoo and the castle. The admission price for two adults and a child was £29.50. It’s pretty good zoo with lots of events. These included an impressive owl handling display and ghost tour.

There is not much weight on the castle. The ghost tour was not until around 5pm, by which time we had run out of things to do. The Grey Lady (Banks’s public house) inside the grounds, advertised as open, was not. This was supposedly closed due to the weather; whatever this was supposed to mean was not forthcoming. Also, the land railway did not run either. Despite this, there was no reduction in entry price. Instead, I was asked if I wanted to make an additional contribution to charity.

The next day we took the taxi to The Black Country Museum (which is a lot like Beamish in Durham). Entry for us was over £30. I am not going to say too much about the place, except that it has a public house onsite. It is called the Bottle and Glass. It was moved brick-by-brink from Briefly Hill (five or so miles from its original site) to the museum. The public house itself was established in 1770s. It had ghosts. The beer was £3 per pint. The bitter on offer was Hanson’s (supposedly an Isle of Man Brewery) bitter. It also had a Weston’s cider on offer too. None of the pump clips were on display. You were disallowed to eat your fish and chips inside the pub. There are two chip shops contained within the museum grounds, one that used animal fat (the more expensive of the two) and the other uses vegetable oil (for skinflints).

There was a diminutive version of the public house at one of the exhibitions in the museum main building. It had an array of old beer containers with botanic printed neatly upon them (of course, ‘botanic’ was later reinvented as ‘organic’). There was video display showing spectators how to make groaty pudding, an old public house special from the Black Country.

Travelling back had slight complications which turned out for the best. I would advise anyone leaving the museum to travel north on the train to walk half a mile to Tipton railway.
No comments: Links to this post