July is a quiet month. Thankfully, there is a great deal of beer festival action in September. When September arrives, you are spoiled for choice: Northwich, Nantwich, Southport, Tamworth, Lytham (Blackpool), Burton, Shrewsbury, Keighley, Saltaire, Birmingham, Ascot, and Grantham.

I usually pick four from those (each corresponding to the four ... Read moreSaturdays of September). I attend those with the fewest train changes; those towns easiest to get to that are sufficiently different from Stockport in terms of proper beer and aesthetics.
No comments: Links to this post 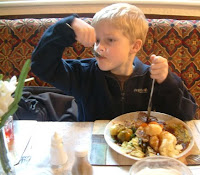 On Sunday 24th January 2010, we had no trouble getting to Doncaster. Parent and child can travel an outward journey for marginally over five pounds from Stockport. Realistically, I would allow for the train to arrive at the destination twenty minutes later, as it was on this occasion.

I was amazed to discover that some of the best public houses are within two minutes walk of the train station (and I do mean two minutes). For example, we have the Railway, which is only the length of the car park away from the station itself. It certainly serves ales but unfortunately it had no hot food. The polite barman advised the Corner Pin. I had no idea where that was but knew it must be nearby. Nonetheless, I thought I would just find the first pub where we could eat, Corner Pin or not.

After leaving the Railway, we walked to the next pub. The sign on all the doors stated that children below the age of ten are not welcome anywhere on the premises. I have only encountered such hostility toward children in UK. So we continued to walk, to serendipitously notice the Corner Pin.

The Corner Pin had an array of people smoking outside. We went inside and were made welcome. There were cooked meals and ales. My son ate the beef dinner; whereas I had I chose not to eat but did drink Jennings’ Snecklifter and Copper Dragon’s Golden Pippin. I was surprised to find that the pub had overcome recent challenges to destroy it and replace it with a park and a single tree. Councils are irrational!
2 comments: Links to this post